Protestors halted traffic briefly in Widcombe Parade on the edge of the city of Bath. South West TaxPayers’ Alliance joined up with ‘Independent Shops of Bath’ local campaign group to help organise a protest in support of Widcombe traders. They are angry at Bath & North East Somerset (B&NES) Council’s costly mismanagement of local road-works and the negative impact it has had on their businesses.

The road-works were supposed to be completed by Christmas but have dragged on for many more months causing chaos and preventing residents from fully using these local shops. Car parking spaces have been slashed by B&NES, causing more difficulties for local businesses.

It’s not only Widcombe Parade that is being plagued by never ending road-works, but also London Road and that is why traders from across the city came together to support the traders in Widcombe. Local toll-road hero Mike Watts told me "I know how difficult current trading is at the Guildhall Market for my fellow traders thanks to poor access into the City centre and problems associated with parking, but it must be even more difficult and worrying for Widcombe traders with the delays in the path and road construction works and the constant queues of traffic throughout the day!" 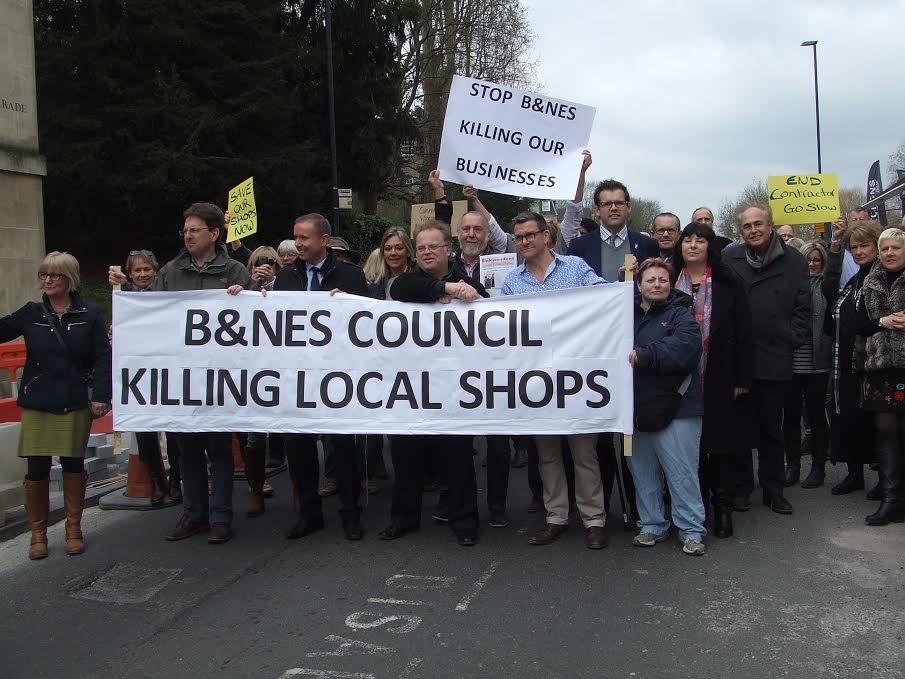 David Maxwell of local award-winning hairdressers led Widcome traders at the protest. "We desperately need things to change rapidly," he said to me. "The Council are very slow to respond or even ignore our pleas.’

Charles Pilton is a fellow local campaigner who has raised a petition in support of the Widcombe traders. "There is a lot of employment at stake," he told me. "So far, the Council have responded without any apparent intention to speed things up or compensate them. The Council could take practical action now to ease the situation—for example by moving the contractors equipment out of the car park behind Widcombe Baptist Church and advertising that it is reopened."

Sometimes you need to get out on to the streets to bring this message home to the local council—and the traders of Bath and their friends certainly did that!