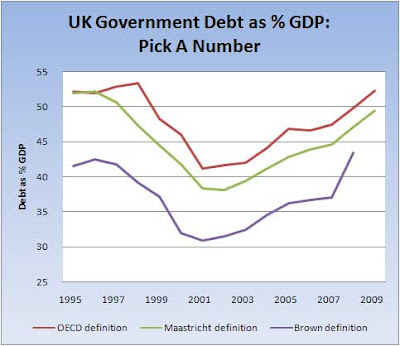 Mr Brown takes his choice and we pays our money

According to the government, because they cut borrowing so much from the level they inherited from the Tories, they have loads of scope to borrow more now. Others point to the leaky roof, and the fact that borrowing is higher now than when Labour came to power.

In theory, it should be easy to see. But in practice, government debt statisticians produce such a vast array of numbers that the truth gets overwhelmed - as the current debate shows only too well.

Let's go back to the basic stats.

The official ONS stats released yesterday say net public debt as at end-September was £645.3bn, equivalent to 43.4% of GDP. In Q2 1997, that percentage stood at 42.9%. So under the official definition, Labour has unambiguously increased public borrowing since it came to office (see yesterday's blog).

There are several points to highlight about this official debt figure:


This official definition of debt was the creation of Mssrs Brown and Balls when they set up their fiscal rules a decade ago (including the rule that said this measure of debt should never rise above 40% of GDP). But now that the fiscal house is in flames - or underwater, or in negative equity, or whatever is today's image - Brown is pointing to alternative debt measures. He claims on them we're doing much better, especially relative to other countries.


Here's a chart showing two of these alternatives - the EU's Maastricht Treaty measure, and the OECD's measure. Both of these measures are gross debt, with liquid assets not netted off, and both are shown relative to GDP (including the OECD's pre-meltdown forecasts for 2009): 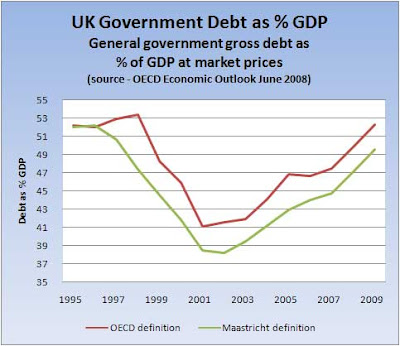 At first glance, you might say Brown's right. On both of these international measures, we're still below (just) the level of indebtedness he inherited (as previous commenters on BOM have argued). So maybe things aren't so bad.


But what Brown doesn't mention is that neither of these two international debt measures has been updated to include Northern Rock. Doing that adds 5-6 percentage points of GDP, taking both measures uncomfortably above the level he inherited. And that's before taking account of Bradford and Bingley, and the £37bn of bank shares he's just bought. Then there's the virtual nationalisation of RBS, which if counted in the public sector would add an eye-watering 120% of GDP to our national debt.


As for our position relative to other countries, it is true that some other major countries do have higher debt to GDP ratios. But as the IFS points out, that was a position Labour inherited, and under their stewardship we have actually been climbing the OECD's indebtedness league table - from 10th to 8th place.


And of course, looming behind all of these recorded debt numbers is that huge pile of taxpayer debt that successive governments have kept entirely off balance-sheet: £1 trillion or so of unfunded public sector pensions, PFI debt, nuclear decommissioning costs, and sundry other guarantees and IOUs scattered around the ex-nationalised industries.