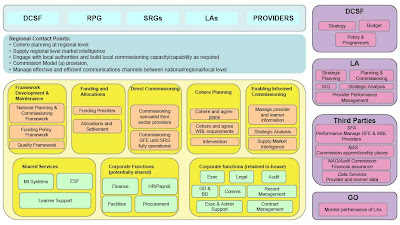 Government doesn't do efficiency. We all know that.

So why does it keep trying to run efficiency programmes? Surely someone up there must have noticed they don't work. Surely someone must have registered how the shambolic Gershon programme turned into an expensive Marx Brothers farce (see many previous blogs gathered here).

Today we hear of a fresh disaster at the Department for Transport. An efficiency programme "designed" to save £57m ended up costing us £81m. Problems included yet another malfunctioning new computer system - this one so haywire it ended up "barking instructions in German" (HTP Mr Naughty).

PAC Chairman Leigh is running out of whatever the opposite of superlatives is: "stupendous incompetence... one of the worst cases of project management seen by this Committee... lamentable."

There are some oh-so-familiar features here. It's not just the badly specced badly managed malfunctioning computer system, there's also the wild understimating of prospective costs (which over-ran by 120%), and the overestimating of benefits (which undershot by 65%).

This is absolutely typical of public sector efficiency programmes: they almost always involve an underestimated increase in spending made against an arm-waving promise of implausible savings somewhere down the line (cf the disastrous NHS supercomputer).

Another favourite is deckchair rearrangement.

BOM readers will be familiar with the Learning and Skills Council (LSC), the abysmally hopeless quango that presides over the nationalised "skills industry". It's an underperforming quagmire of 500 separate organisations and bureaucracies costing us over £12bn pa, yet failing to deliver anything that employers value in terms of skills (see previous blogs here - including video - here, and here).

So earlier this year, amid a rising scream of criticism, the government claimed it was closing the LSC.


Closing? As decisive as that?

Yesterday we learned the truth - it's another deckchair job.

According to the official plans just issued by the Department for Children Schools and Families, the LSC will be split into three. There will be a Young People’s Learning Agency (another quango), a Skills Funding Agency (yet another quango), and a rump which will be bundled off to local councils. The organisation will even more opaque (see sample organomissionstatementwibblechart above). But the number of people employed will remain completely unchanged. The nameplates on the front doors will change, but there will be no saving whatsoever. Indeed, the chances are that costs will increase, if only by the cost of planning and executing the deckchair shuffle (HTP MR).

The truth is that government is simply not capable of making itself more efficient. Thatcher tried, Blair tried, and in his own way, even Brown tried. They all failed. Indeed, their attempts have generally made things worse.


The only way we can hope to get more efficient government is to break it up. Without choice and competition as the driver, efficiency doesn't stand a chance.