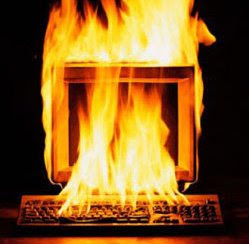 The Times and Computer Weekly bring us an update on the government's ongoing IT fiascos. BOM readers will be familiar with all of them, but to see them added together still brings on a scream:


Given such an appalling record, what on earth can be done? Tony Collins, the redoubtable Editor of Computer Weekly, says Parliament should get more involved at an early stage:

"MPs should scrutinise IT projects and programmes before they are approved formally, instead of when constituents complain.


MPs are not computer experts. But they don’t need to be. They could challenge assumptions about costs and time frames, and test whether officials understand fully the commitments they are about to make. They could soon discover whether the complexity has been underestimated.


The preference of government, however, is for continued secrecy over its biggest schemes — what it calls “mission-critical” projects. The Government is even willing to go to the High Court to stop the publication of early “gateway” reviews — which assess risky projects — on the ID cards scheme. This culture of secrecy and lack of parliamentary scrutiny before a project starts to implode can only contribute to the cycle of failure."


It sounds like sensible advice, and he's spot on about the damage we suffer because of HMG's obsessive secrecy (the monstrous ID cards project being a prime example).


But the key problem here - the key reason these mega-projects burn so much of our cash - is the simple fact that Big Government just doesn't do competence and efficiency. Big Government is too big and lacks the vital spur of choice and competition.


Precisely why that's such a problem is explained in Paul Ormerod's book Why Most Things Fail ( and see here). In essence what he says is that, just like in evolution, in economic life most things end in failure. Failure is virtually universal, whereas success is rare and totally unpredictable. Which means that to thrive as a society, we need diversity and experimentation. We need to ensure that despite the huge preponderance of failure, we still get enough successes to move forward.


Compare and contrast with Big Government's top-down one-size-fits-all IT projects. Does anyone seriously believe that a combination of here today gone tomorrow politicos, cult-of-the-amateur mandarins, and blood-sucking consultants, will somehow be able to hit on the magic formula that delivers success in the face of almost universal failure?


We all know the real solution - Big Government needs to be broken up into smaller competing operations.


Unfortunately, we still haven't discovered how to get those turkeys voting for it.