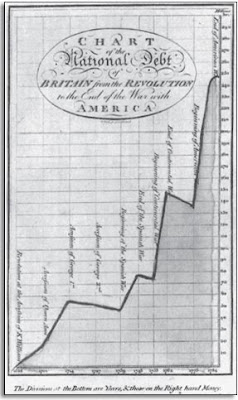 And they thought things were bad then...

The last time we calculated the real national debt - including all those off-balance sheet Enron items - we got to a figure of £1.8 trillion. But that was last year, and things have moved on since then.

Now Brooks Newmark has updated the numbers in a pamphlet for the CPS. He calculates the current figure at £2.2 trillion, or £86,000 for every single British household.

Here's how he gets there:

So the next time some soothsayer tells us our national debt is still low by international standards, we should remember that - our true debt is nearly 160% of GDP, much higher than most competitors on less than 100%.

Except of course, as beady-eyed readers will have spotted, Newmark's figure still excludes a few of the debts we've blogged so often.

First, although most of the Crock and Bradford & Bingley debts are now included in our official national debt, Newmark's total deliberately excludes the liabilities of our two big semi-nationalised banks - RBS and Lloyds. Adding them in would increase our debt by £2.4 trillion, more than doubling the total. To be sure, those liabilities are backed by the banks' assets, which are supposedly enough to cover us. But how lucky do you feel?

Second, Newmark omits the costs of decommissioning our old nuclear power stations, which are a direct liability on taxpayers. When last sighted, we reckoned that amounted to £73 billion.

Third, he (and we) omit the scariest liability of them all - the cost of future state pension payments - ie the old age pension. When we crunched the numbers on that (based on the Turner Report's projections) we came to a nerve-shredding liability of £7 trillion. In truth, the current number is only around half that because the relevant discounting factor for future payments has increased (ie the yield on government index-linked bonds has gone from around 1.5% pa to around 3% pa). So let's call it £3 trillion.

Which means that if we wanted to be really cautious - admittedly not something our present rulers have been much good at - we'd say our real national debt is now in the range £7-8 trillion. Or around £300,000 for every single household.
This website uses cookies to ensure you get the best experience.  More info. Okay