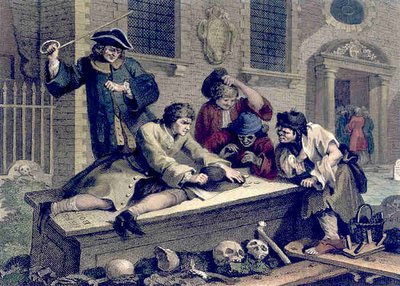 
"McDonald's is set to become the UK's largest apprenticeship provider, offering all workers the chance to qualify in "multi-skilled hospitality".

The fast food chain said government funding meant it could offer the scheme to one in eight of its staff this year and up to 10,000 every year from 2010.

The McDonald's apprenticeship will be equivalent to five GCSEs at A* to C."

It's actually part the government's current headline management/money burning exercise known as Doing Something Not Nothing. According to the official press release:


"The Government will fund an additional 35,000 apprentices next year to strengthen the country's competitiveness and help beat the downturn. It will invest £140 million to deliver new and additional apprentices nationally in both the public and private sectors."


And that £140m is in addition to the £1bn it has already committed to spend on apprenticeships this year.

But how does training another 10,000 burger flippers contribute to "the country's competitiveness"? (And how does it help with the government's costly anti-obesity campaign?)

What we need to remember is that "apprenticeships" constitute a Holy Grail of economic and social policy. Ever since anyone can remember, successive governments have been trying to revive the apprenticeship system: if only we could have apprenticeships like the Germans have, we could not only build Mercedes cars, but all those NEETS we've got would be transformed into productive members of society - surely, everyone can see that.

But of course, apprenticeships only work if employers actually take on apprentices, and with the virtual demise of British manufacturing, they largely stopped doing so (Rolls Royce, which featured so heavily in yesterday's media coverage, is a shining exception to the rule).

Governments naturally decided that employers must have got it wrong, and stepped in themselves. So we've had a 40 year whirl of expensive but largely useless youth training schemes, including the Major government's "Modern Apprenticeships" (as opposed presumably to Old Fashioned Apprenticeships), which were later themselves abolished by Labour in favour of the more modern sounding "Apprenticeships".

But the basic problem remains - while the essence of an apprenticeship is hands-on learning while working for an employer, most employers do not want to take on apprentices, because they are expensive to train and can leave at the drop of a hat. As our local plumber put it, "I've had three of them. Only one was even halfway good, and he dropped out on me - one Monday he just never showed up - left me in a right hole. Never again, and if you want my opinion, the whole idea is a complete waste of time and money."

Unlike the days when apprentices were indentured - with their fathers actually paying to have them so bound - apprentices today can walk whenever they feel like it, severely reducing the incentive for any employer to take them on. And even on the government's own dubious figures, drop-out rates are close to one-half.

What's more, the government's grandiose programme to persuade all 16 year olds to stay on at school/college means that the minority who do leave are rather unlikely to be the ones employers might want to take on as apprentices.

Apprenticeships are just one part of the shambolic £12bn pa nationalised skills industry, about which we've blogged many times (eg see here and here). Its essential purpose is to keep down the jobless totals, and to try in some way to correct for the grotesque failure of our state schools to equip everyone with the 3Rs.

It is A Huge Waste of Money, and would be high on any serious list for expenditure cuts.

PS So how much taxpayers' cash will McDonalds be getting for taking those 10,000 apprentices? We'll try to find out.
This website uses cookies to ensure you get the best experience.  More info. Okay