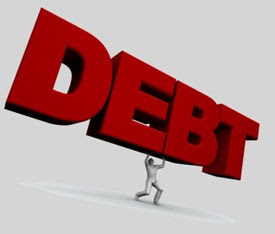 This morning Guardian columnist Polly Toynbee was on BBC R4 Today with the economist Ruth Lea. They were discussing the question of government debt and whether the UK might lose its AAA credit rating.

According to Polly Toynbee, the risks have been hugely exaggerated by the City and their groupthink apologists. She says:


"No serious economist thinks Britain will default on its debt."

Well now, let's just think about that for ourselves.

First off, we need to be clear about the meaning of default. When a modern government issues debt denominated in its own currency, it is highly unlikely to default in the sense of failing to pay the interest and principal as denominated in that currency. Why should it, when it can simply run the printing press to manufacture the readies it requires?

The default that matters on such debt is default via inflation - ie the government repays, but in devalued currency. Which is precisely the way our government defaulted last time round.

Another way of putting it is to say that, in reality, a major government issuing debt in its own currency is never going to be less than AAA credit quality. But that isn't the important point: if the currency stinks, international bond investors will not want to hold the government's debt however high its formal credit rating.

So in terms of the government's borrowing in the sterling bond market (gilts), what matters more than anything is whether the market is confident that UK inflation will remain low and sterling will maintain its value.

And we all know what happens when that confidence goes. The 1970s showed us precisely: gilt yields soar (to over 17% in 1975), sterling plunges (to near-parity with the US dollar in 1976), and we all get poorer. Even though in the 1970s HMG never actually lost its formal AAA credit rating.

However, where the formal credit rating becomes absolutely vital is with government borrowing in foreign currencies. And that's for the very simple reason that domestic governments do not have access to the foreign currency printing press: they cannot just print more to pay off their debt obligations. Outright default - or "rescheduling" as it's known in polite circles - becomes a real possibility.

Which is why the weaker members of the Eurozone such as Greece are now facing a funding crisis. They have done their borrowing in Euros, which for them is effectively a foreign currency - the vital printing press is controlled by the Franco-German alliance. Greece's credit rating has just been cut to BBB+ - just three notches above junk - and their debt interest cost is now over 2% pa higher than Germany's.

Some people argue that's not a problem for us, because HMG borrows in sterling not foreign currency.

Unfortunately, while that's true for the vast bulk of our £0.8 trillion official government debt, the bank bail-outs have transformed the situation. That's because HMG has guaranteed all the liabilities of our entire banking system, including their massive foreign currency liabilities.

How much is that? As at end-October the banks' foreign currency liabilities totalled a very scary £4.2 trillion, or nearly three times our annual GDP. And as we can see from the following chart, over the last decade that exposure has ballooned beyond the range of anything we have ever seen before: 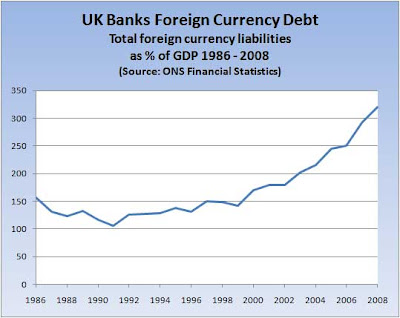 Now, of course, those £4.2 trillion of liabilities are matched against a £4.2 trillion pile of foreign currency denominated assets held by the same banks. So you might ask what's the problem?

The problem is that we have absolutely no idea what that £4.2 trillion of so-called assets are actually worth. It is generally believed that the banks have still not confessed to the true toxicity of their bad assets, and it would be frankly amazing if that £4.2 trillion is worth what it says on the tin.

Which leaves us with a serious problem. Because if there's a shortfall and our busted banks cannot make up the difference, then HMG will have to find a very large amount of foreign currency to plug the gap.

That's when our credit rating will become absolutely critical.

And that's also when we will find out what serious economists really think.
This website uses cookies to ensure you get the best experience.  More info. Okay