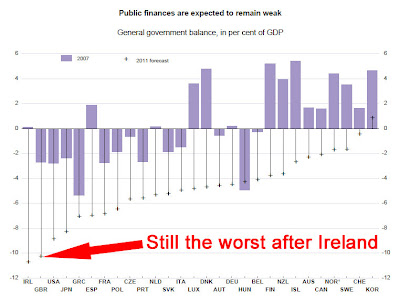 The OECD has just published its latest six-monthly World Economic Outlook. And you know what? It's not all bad news.

They say that world growth is picking up faster than they expected last time, and it's been driven by China and the other emerging economies, rather than by yet more fiscal excess here in the West.

So world trade is picking up again, and struggling economies like the UK have a real chance of earning their way back to solvency.

Right, that's the good news over with.

The bad news is that when it comes to government borrowing we are still the worst economy in the whole of the OECD, bar Ireland (see chart above). The OECD forecasts that HM Government will borrow 11.5% of GDP this calendar year, and a further 10.3% next. Which compares with the rose-tinted figure of 8.5% forecast by Darling for 2011-12.

The OECD's assessment of the UK?

"A weak fiscal position and the risk of significant increases in bond yields make further fiscal consolidation essential. The fragile state of the economy should be weighed against the need to maintain credibility when deciding the initial pace of consolidation, but a concrete and far–reaching consolidation plan needs to be announced upfront. While monetary policy should remain expansionary over the forecast period to support activity against the background of low levels of resource utilisation, the process of normalisation of interest rates needs to start soon in response to the expected gradual rise in underlying inflation."

Translation: public sector borrowing needs to be gripped soonest; Mr Osborne needs to announce a quantified plan for getting the public finances back in the black and keeping them there (aka a new set of explicit fiscal rules); and the Bank of England needs to increase interest rates now before our obvious inflation problem gets entrenched - that is, fiscal tightening is not an alternative to monetary tightening... we have to brace ourselves for both.

Oh, and Mr Osborne should equip himself with one of these: 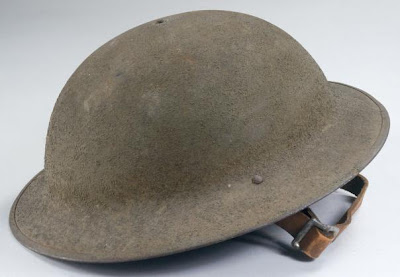 PS The more we hear and see of David Laws, the more impressed we are. We thought he was pretty good under fire in the Commons yesterday, and in matters fiscal, he seems a lot drier than many a Tory front bencher. It sounds like he may provide some much needed resolve in the major battles to come.
This website uses cookies to ensure you get the best experience.  More info. Okay