Still a bit thin and droopy

Yesterday George Osborne was interviewed by Andrew Marr (watch again here), and although most of the interview all too predictably got stuck on bankers' bonuses, Osborne did give us a quick flash of his pencil, and how he's been wielding it to pencil in a list of spending cuts.


He rattled off the following headings:


Unfortunately, Marr didn't quiz Osborne on the details of this list, so we can't be sure our interpretation is correct. But if it is, such cuts would deliver meaningful savings.

Freezing public sector pay for say two years would save around £10bn pa (eg see this blog), and truncating "middle class welfare" could save another £10bn pa. Add in another £10bn from procurement/investment cuts, and suddenly we're looking at a total £30bn pa. Cutting public sector pensions benefits would also generate savings running into many billions, although not in the short-term: like all pension arrangements, changes in benefit accrual rules take years to work through.

So we can at least see that Mr Osborne does have a pencil, even if it needs further sharpening, and even if it may not yet be quite up to the job.


Now, as we all know, the reason he and other politicians are so unwilling to be specific about spending cuts, is that all cuts involve losers. And losers have a horrible tendency not to vote for you.


So how do we counterbalance that? How do we make sure that the winners know who they are and understand how they benefit from the spending cuts?


In theory it shouldn't be too hard - the winners are taxpayers, and they benefit by having to pay less tax. But in practice, whereas the losers from a spending cut tend to lose a lot (eg their jobs), the winners from a tax cut are generally spread across millions of taxpayers, each of whom only benefits by a relatively small amount.


On the other hand, many a mickle makes a muckle, and when you add up all those relatively small amounts across all the spending cuts our politicians shy away from, the total burden on taxpayers is huge. The fundamental problem is that most people have no idea just how much tax they are paying.


And that's bad. Because it means that in general we taxpayers are not nearly exercised enough about our high spending politicians, even though it's costing us getting on for half our income. And by the same token, we tend to give far too little credit to politicians who promise to cut back. It is an imbalance that virtually ensures government spends too much.


Now, a small businessman has come up with an excellent way to redress that imbalance. He's begun presenting his customers with a bill that breaks down the total between what goes to him and his workers, and what goes to the government. And the latter includes not just VAT, but also his business rates, employers' national insurance, the estimated tax and national insurance paid by his workers, insurance tax, climate levy, landfill tax, etc etc etc.


Michael Van Clarke runs an upmarket hairdressing salon. His haircuts are are clearly expensive, but no matter: the important point is that when the customer gets the bill they see that virtually half the cost goes straight to the government. Or to put it another way, without all the taxes, the haircut would only cost half as much: 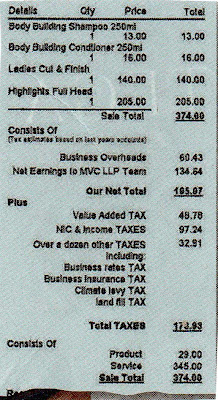 “People just don’t understand how much tax they are actually paying; it’s at least twice what they think.

In most businesses, about half of your bill is made up of various taxes and I think there should be far more awareness of that.

We have a high-value clientele — movers and shakers from all walks of life — and they have no idea of the amazing amount of tax that is built into their bills.”

This is a great idea. An idea that could transform public perceptions, and get taxpayers demanding some serious retrenchment from our politicians.


It's an idea that could put some real lead in Mr Osborne's pencil.