Subsidies - or using taxpayers’ money to support certain sectors, businesses or activities - are like any other form of government spending. But analysis from the TaxPayers’ Alliance has found that 64 per cent of subsidies handed out by the government wouldn't have to be reported under planned transparency thresholds. That seems like a huge amount of taxpayers’ money going unscrutinised in these stealth subsidies.

State aid was one of the major issues between the UK and EU when negotiating a deal. As a member of the EU, subsidies given by the UK were heavily restricted and controlled to maintain a level playing field between member states. The UK granted much less state aid than other EU members – the tenth smallest as a percentage of GDP in 2019 - but ministers have promised a new and improved post-Brexit subsidy regime.

Finally, in June this year, the government outlined its proposals for a new subsidy control regime. The question of how to manage subsidies now falls to our parliamentarians. The subsidy control bill, currently making its way through the house of commons, replaces the EU state aid regime. If anything, surely ‘taking back control’ of state aid should mean more scrutiny than before.

But here’s the rub. The old EU system imposed a transparency threshold requiring subsidies worth €500,000 or more to be reported. The UK did exactly that, with total reported non-agricultural subsidies between 2010 and 2019 being worth €80.1 billion. Under the subsidy control bill, the government will impose a £500,000 threshold for subsidies to be reported. As the pound is more valuable than the euro, this means fewer subsidies will have to be reported now than as part of the EU. It’s an issue we first flagged in March, before the bill was even published. If part of the allure to vote for Brexit was making Westminster more accountable for decision-making, then the subsidy regime is going in the wrong direction.

What’s peculiar is that the UK doesn’t have such a high threshold for other forms of transparency data. For example, government departments have to report spending over £25,000 and local authorities above £500. Imagine how much information taxpayers wouldn’t be able to access if these suddenly changed to £500,000. Why should subsidies be any different?

There is a good reason for wanting the information to be as transparent as possible. Subsidies have uses in supporting industry, but they also pose a significant danger. They cause resources to be misallocated, from activities which would occur if they didn’t exist, to those which have been chosen by politicians. Less transparent systems make this problem much worse.

One example is research and development (R&D). In theory, the new regime allows more flexibility to subsidise R&D. But as we recently identified, some government departments already dish out billions in R&D funding, with a notable lack of robust scrutiny of the efficacy of research outcomes. Projects funded included work on “an international network of scholars, policymakers and practitioners to promote gender and intersectionality” and another which “will explore how immersive technologies can be used to engage audiences of all ages with dinosaurs and robots.” Why bother starting a business, say, selling widgets when you can get a £499,999 subsidy for niche widget research - with taxpayers none the wiser?

As with all public spending, transparency is the best guarantee we have. Which is why we need to have as transparent a subsidy control system as possible, by setting a £500 threshold for reporting subsidies as proposed by John Penrose MP. This will enable taxpayers to hold the government to account and ensure that they are not arbitrarily picking winners or propping up losers. 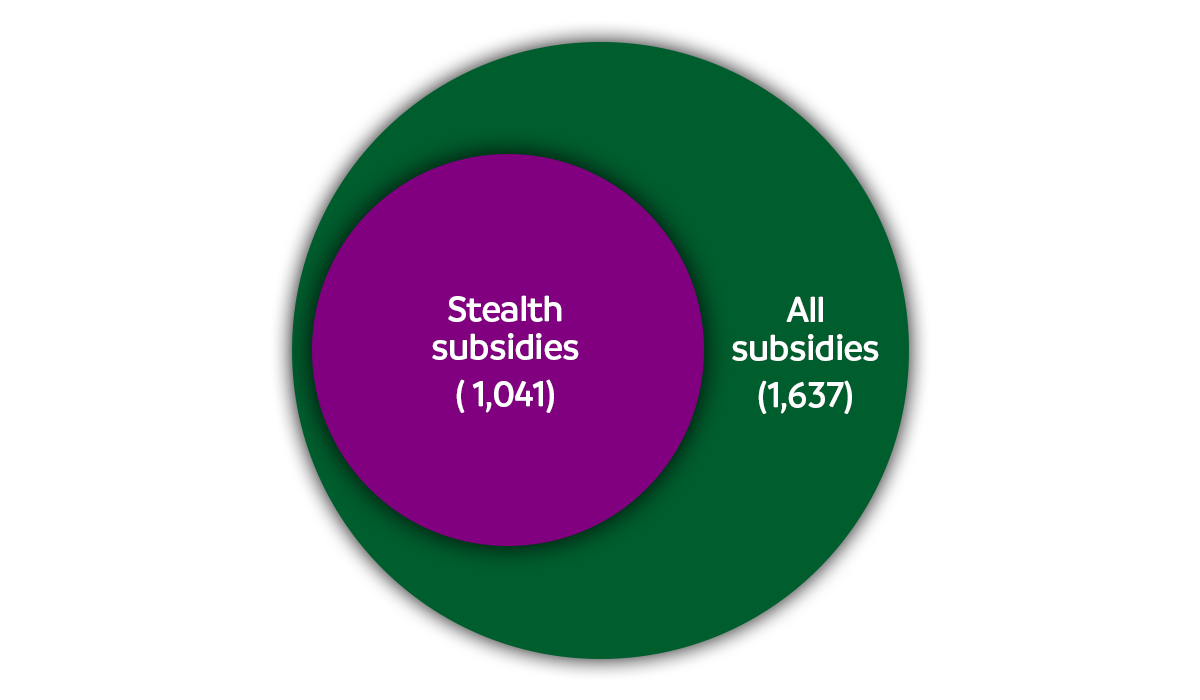 Using the government’s subsidy transparency database, we can see that so far this year there has been a total of 1,637 subsidies reported as of 22 November. If we remove those with a ‘subsidy amount’ of £0 it leaves 1,376 subsidies. Of these 1,041, or 64 per cent, (uploaded voluntarily) fall below the £500,000 threshold. They equate to almost £157 million out of the total £2.5 billion subsidy figure for 2021 so far. Although a minority in monetary value, these stealth subsidies actually make up the majority of grants given.

This could be just the tip of the iceberg, but nobody knows – including the government – because there could be thousands more subsidies which fall below the £500,000 limit and haven’t been reported. We’ve barely left the EU, and we could already be looking at hundreds of millions of pounds in stealth subsidies.

Chart 1: total number of subsidies needed to be reported under different thresholds, 2021

And all those subsidies registered as £0? We asked the government, and they said that £0 is often used as a placeholder for data which has yet to be entered.

The sums on the table are hardly pocket change either - £8 billion of subsidies were reported in 2018 alone, according to the government’s own impact assessment. Again, this figure is only for reported subsidies so is likely an underestimate. However, another EU database used in the impact assessment suggests that the UK reported subsidies worth £4 billion per year between 2016 and 2020. That’s potentially a 50 per cent discrepancy in subsidy value.

The apparent reason preventing the government from lowering the reporting threshold is cost. According to the Centre for Public Data, this could be as little as £20,000 per year. Far be it for the TaxPayers’ Alliance to make this point, but the benefits of making all information above £500 transparent would be well worth this small additional cost.

It’s clear a highly transparent state aid system would protect against abuses, limit the distortions and improve public trust in the new subsidy-making processes. What better way for ministers to showcase post-Brexit Britain than by taking back control of transparency.