On Saturday the TaxPayers’ Alliance took to the streets of Tower Hamlets as part of our ongoing War on Waste.

Armed with leaflets, placards, badges and fact books the TPA took the message of fiscal responsibility to an area that has had very significant financial difficulties in recent times. Some of the stories from recent times are absolutely scandalous, for example they hired “Celebrity Chef” Ainsley Harriot to judge a curry competition for more than £10,000 just a few months ago.

Unsurprisingly our message was very well received with many locals stopping to discuss the problems they see and to tell us how they thought the local authority could be run better.

Jennifer Salisbury-Jones and Harry Fairhead were joined by two stalwart activists, Matt and Tim outside Whitechapel underground station. The response was very positive and leaflets were practically snatched from our hands.

Indeed, it wasn’t long before all 400 leaflets had gone and it was time to pose for the all-important team photo had to be taken, a local PCSO kindly played the part of the paparazzi which concluded a very successful day.

It is clear that the TPA’s message gets a good response from the people of Tower Hamlets, and if things do not improve we will return to deliver it once again and to maintain the pressure on the local authority to get better value for money for the taxpayer. 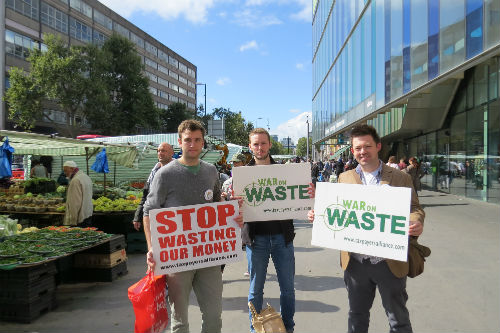