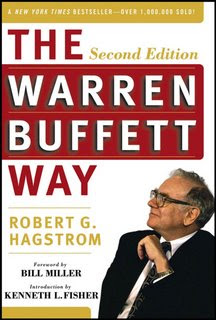 If today's reports are to be believed, the government is all set to inject £50bn of taxpayers' money into bank equity. It's being trailed as taking a leaf out of Warren Buffett's book, the legendary superstar of investment who "saved" Goldman Sachs by putting $5bn into their equity last month.

As we've said before, nobody would start from here. But given we are here, we have to recognise that there are no Buffetts queuing up to buy Barclays or RBS stock. If government money is the only realistic option for shoring up our banks' balance sheets quickly, and if we taxpayers are to play Warren Buffett, we should insist on the full Warren Buffett Way.

So let's note how that worked with Goldman.

Buffett invested $5bn in Goldman "perpetual preferred stock paying a 10 percent dividend. The securities can be repurchased by Goldman at any time in return for a 10 percent premium".

What does that mean in English?

Against that, Buffett cannot demand repayment - he's lent the money indefinitely. And once Goldman get through their current difficulties, they can buy him out for a fixed $5.5bn.

But Buffett also demanded and got something which could turn out to be far more valuable - "warrants to buy $5 billion of common stock for $115 a share at any time in the next five years".

Goldman stock was trading around $125 at the time, and it's been estimated the warrants alone were worth $1.8bn.

Of course, as we're reminded every night by the BBC and C4 News, stocks can go down as well as up. So if Goldman's stock price slumps for the whole five years, Buffett's warrants may turn out to be worthless. But if Goldman's stockprice could even claw its way back to its level in early September, he'd make getting on for 50% profit on the whole deal.

And that's the Warren Buffett Way: the way we taxpayers should expect our government to act as it negotiates with the banks this week. If bank shareholders want an equity injection from us, it has to be on our terms.

We will be watching proceedings very closely.
This website uses cookies to ensure you get the best experience.  More info. Okay