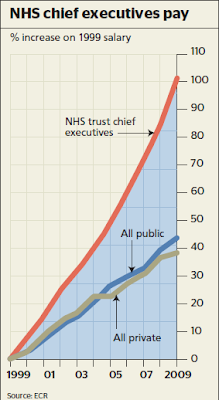 More revelations this morning on the pay of top public sector bureaucrats:

The editor of the IDS NHS Boardroom Pay Report says: “It seems that the equation has fallen on the side of high salary awards with pay continuing to run ahead of the rest of the workforce.” Yes, it sure does seem that way.

So how can it possibly be justified?

We're back to the peanuts and monkeys argument - if taxpayers aren't prepared to pay up, then the public services will be run very badly.

But paying loads of money to the bosses doesn't necessarily solve the problem. You could simply end up with a bunch of overpaid monkeys - and there are plenty of indications that the NHS has done precisely that.

The more thoughtful public sector managers recognise that their big pay increases have not resulted in much change. The extra money has simply gone to people who would have been doing the job anyway.

There's a very frank and interesting article on this in today's Times by Sir Norman Bettison, the Chief Constable of West Yorkshire. He says he's not worth his £213k pa, and goes on:

"People join, and remain in, the public sector because of a sense of vocation — to make a difference to society or to the quality of people’s lives.

The best leaders are those who can secure long-term public value and a vision for their staff. Not some mercenary performance manager peddling a short-term fix. And, here is the irony: public sector leaders would have continued to provide that leadership for far less pay."

Well done Sir Norman, for sticking your head above the parapet.

And even if all this extra money did somehow manage to attract a whole new cadre of brilliant managers from outside, would they be able to manage?

Suppose all  those successful private sector managers who've spoken up against the NICs increase had spent their careers working in the public sector instead. Would they have been allowed to manage? Would they have had freedom to take the nasty decisions that are so often necessary to shape winning businesses?

Take the BBC. Boss Mark Thompson may or may not be a monkey, but he sure gets a load of peanuts (£800 grand pa). Yet nobody could seriously argue he runs an efficient operation. BBC waste and expense is legendary.

And just today we hear he's caved in to pressure on closing down 6 Music. Here's a pop-pickin' music station that costs taxpayers a packet and could easily be provided by the private sector (if there's actually a demand for it, that is). But a few months campaigning by opponents of closure - and doubtless some backroom pressure from the politicos - has sent Thompson running for the hills. He's folded without a fight.

And that's the public sector for you. There's no upside for managers taking courageous decisions. There's no crucial bottom line like private sector businesses have. No paying customers whose word is law. Just a load of political pressure and fudge.

As we've blogged many times, the only way we can achieve real efficiency in the public sector is to break it up, and put customers in charge. Choice and competition are ultimately what drive efficiency in the private sector - not better managers per se. The better managers are the result of choice and competition, and the clear understanding that nobody owes you a living.

Which leaves us paying increasing amounts of money for underperformance. Underperformance that is hard-wired into the public sector's very structure.
This website uses cookies to ensure you get the best experience.  More info. Okay