The Summer Budget was a fiddly affair with sixty policies being implemented.
The value to the treasury of each policy can be considered by:

The OBR rates the uncertainty of the costing of each policy from Low to Very High. Just as in business, certainty of future revenue and expenditure is very important as it allows for much more accurate planning.

The table below shows how they break down. 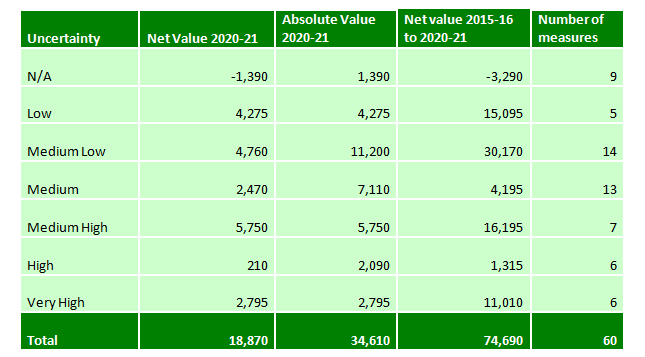 N.B. Rounding means figures may not match the OBR Fiscal and Economic Outlook

The high and very high uncertainty category policies have almost £5 billion of absolute value to the treasury. That such a large absolute sum is uncertain also creates uncertainty for the economic targets.  As such it is difficult to say whether these will be met and perhaps greater measures may have to be taken in due course in order to do so.

Moreover, all of the very highly uncertain valuations relate to tax measures, as are all but two of the highly uncertain policies. For example, these include measures to reduce the avoidance of Capital Gains Tax by private equity and hedge funds (policy 27) and to enhance tax compliance in the wealthy (policy 33).

These two measures alone are expected to raise a combined £655 million in 2020-21 and are typical of the government’s frequent use of anti-avoidance measures with highly uncertain revenue forecasts to plug gaps in public finance forecasts.

A budget surplus is now expected for 2019-20, one year later than previously forecast in the March budget. Given the levels of uncertainty surrounding some of the policy measures, this should not be taken as guaranteed. It is necessary to remember that all forecasts are precisely that – forecasts – and a cynic might question whether they will stand the test of time.

A more certain way of restoring the public finances to order would be to reduce government expenditure. Not spending money you don’t have is much easier than trying to raise tax revenues – especially when the tax take hasn’t been higher than 36.7 per cent of GDP since records began in 1963 (and it’s more usually around 35 per cent).

We demonstrated in our Spending Plan how this could be achieved, and this - rather than speculative revenue raisers - is how we should reduce the budget deficit.