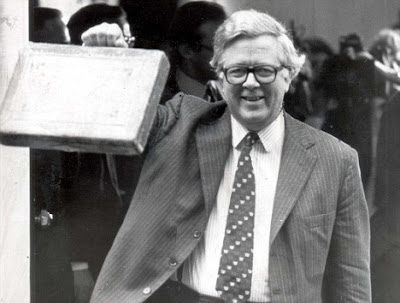 We've had these arguments before

Thus the BBC headlines yesterday's budget analysis from the Institute for Fiscal Studies. And it's a pretty good summation of how the BBC and many other media commentators sees the whole issue of fiscal restraint. Because when you read what the IFS actually says, they don't use the highly emotive word "worst" at all. What they actually say is:

"We are looking at the longest, deepest sustained period of cuts to public services spending at least since World War II."

According to the IFS, if you add the cuts already announced by Darling to those announced by Osborne yesterday, and if you add in the announced tax increases, you end up with a total fiscal squeeze of getting on for 7% of GDP by 2015-16: 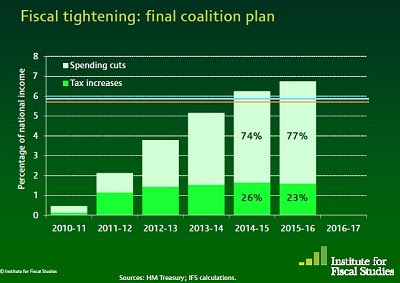 So the cuts are going to be long and deep, which nobody can deny.

Well, nobody that is, except those naive people who simply look at the government's spending projections.  People like John Redwood, who at the TPA's budget briefing yesterday, drew attention to the rather striking fact that under the Osborne plan, total public spending is not facing any cut at all. In fact, it is projected to increase from £697bn this year to £758bn in 2015-16, a rise of 9%.

How naive can you get?

It puts us in mind of a naive Chancellor who told his officials he wanted to manage public spending on a cash basis, just like ordinary people in the real world have to manage their own  spending. You can imagine the pitying looks he got from his mandarins, the men who'd spent their entire careers devising arcane and convoluted procedures to manage public spending in so-called "volume terms". The priority, you see, was to focus policy attention on the volume of provision rather than the second-order issue of its cost (for a flavour of that world, see this dense Treasury brief from 1979).

That Chancellor was Geoffrey Howe, and he went on to transform the system of public expenditure control so that henceforth it focused on simple naive old cash rather than volume projections in RPE adjusted cost terms. It was a vast improvement, particularly in terms of fiscal control.

And when we look at today's spending plans in those simple old naive cash terms we find the following:

So with the possible exception of capital spending, where are those worst-ever cuts?

The fact is that when people speak of cuts, what they're usually talking about is the cash spending plan deflated by the projected increase in average prices across the economy (the GDP deflator). As noted above, total cash spending is projected to increase by 9%. But with average prices forecast to increase by 13%, the inference we are invited to draw is that real spending is planned to be cut by 4%, with much bigger cuts for many individual programmes.

But what if the price of the things the public sector buys increases by less than 13%? Sure, we know that for most of the last 13 years, the price of public purchases (including labour) has increased much faster than average economy-wide prices, but that's not an immutable law.

If through a mix of pay freezes/cuts and contract renegotiation the price of government purchases could be held down, then suddenly the "cuts" start to disappear. Indeed, if the price increase could be held below 9% over the 5 years, then overall public spending in real terms doesn't get cut at all.

In the real world, families and businesses react to straightened circumstances by seeking out cheaper sources of the goods and services they need. It's time the public sector did the same.
This website uses cookies to ensure you get the best experience.  More info. Okay