The Tory leadership contest has resurrected an age-old debate about the best economic policy to tackle rising prices. There’s been a lot of commentary in the media about the danger of cutting taxes at a time when inflation is spiralling out of control. Rishi Sunak recently claimed that Liz Truss’ proposed tax cuts would add “fuel on the fire” and that they “risk stoking inflation”, while Dominic Raab has said her economic plans would be an “electoral suicide note” for their party. And that’s just the Tories!


Traditional economic logic says they’re bang on. The textbooks generally suggest that a policy of fiscal loosening (cutting taxes and hiking government spending) drives up demand in the economy and, without a simultaneous shift in supply, prices go up. So why is Truss sticking by her promises to cut taxes? Does she know something we don’t?


Perhaps the answer lies in looking at what actually happened during previous periods of inflation. This isn’t the first time we’ve had this debate, after all.


We’ve done some basic statistical analysis to shed some light on whether tax cuts have been correlated with inflation in the past. To do this, we’ve used the last 67 years of data on inflation and the tax burden (the same data which shows it reaching a 70 year high).


To ensure we’re properly checking for a relationship between the two, we’ve compared figures for inflation with the tax burden the year before: this is because it’s generally accepted that it takes up to approximately a year for changes to taxes or government spending to have an effect on prices and the inflation rate, through their impact on consumer demand.


A few caveats. Even though it would be impossible to account for every factor, we tried to adjust for a few other key economic factors which might influence inflation: government spending, consumers’ disposable income and employment rates.


We also made sure to look at the impact of changes in tax rates in our model, rather than whether a higher level of the tax burden itself is linked to inflation. After all, it’s the tax cuts which would theoretically trigger a spike in demand, not the level itself.

Chart 1: Retail price index and disposable income as a proportion of GDP from 1948 to 2021, per cent 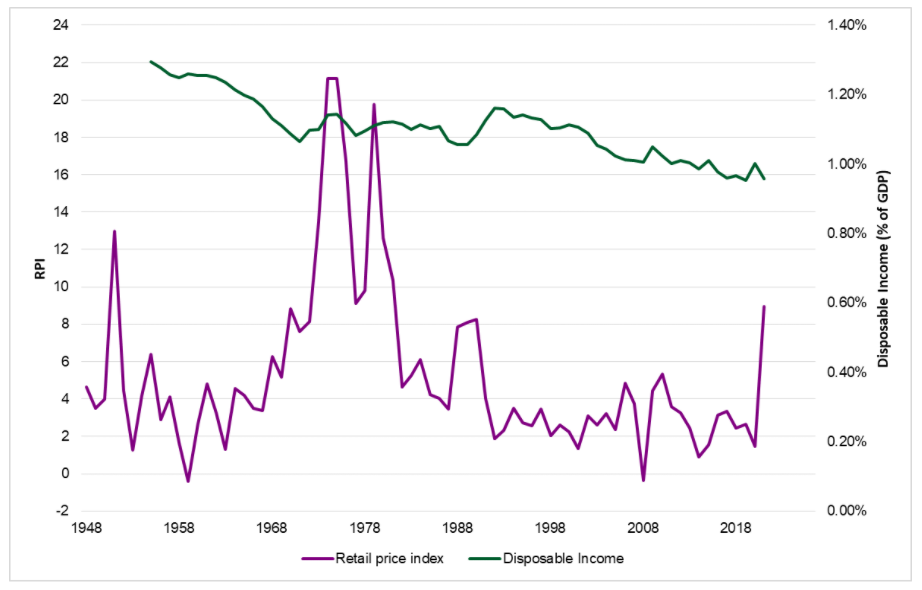 We chose to include disposable income as a control variable because it’s been commonly argued that the effect of tax cuts on inflation depends on the existing level of disposable income. In simple terms, on how much money people have in their pockets. Across our time period it fluctuated a little (and broadly fell), but didn’t seem to mirror levels of inflation. 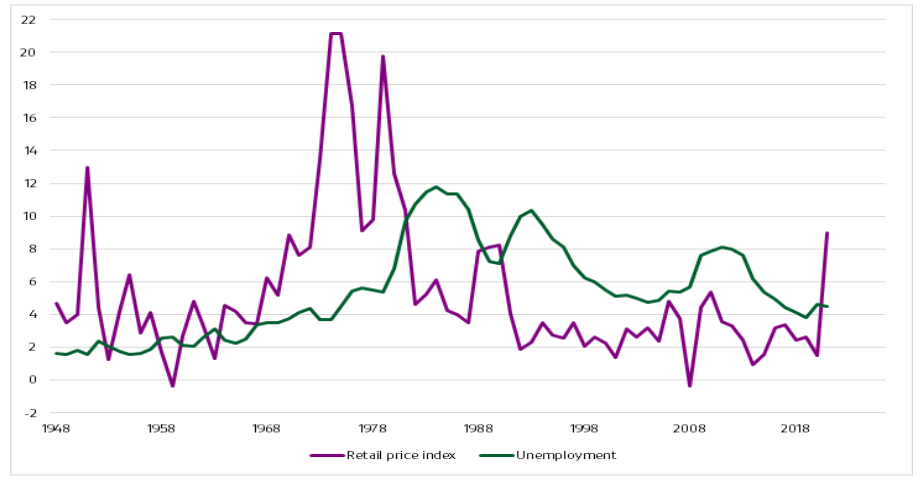 We also chose to include unemployment because of the common belief amongst economists that at times of low unemployment, there is greater inflationary pressure on the economy because of workers’ greater bargaining power. As can be seen on the graph, inflation and the unemployment rate generally seem to be the inverse of one another - periods where unemployment has been higher have coincided with inflation being at a lower level. So that checks out.


Chart 3: Retail price index and total managed expenditure (TME) as a proportion of GDP from 1948 to 2021, per cent 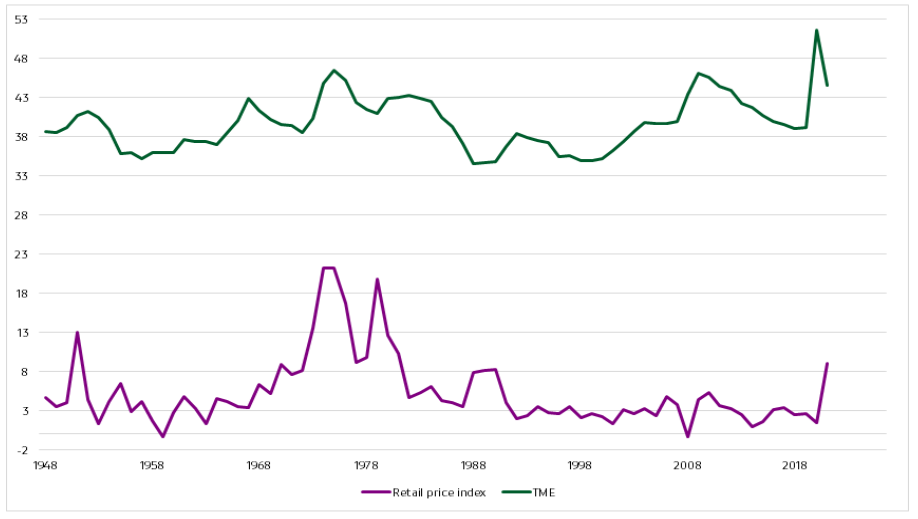 Finally, we chose government spending as our third control variable. It’s been massively overlooked in the current debate, but government spending is the other side of the coin when it comes to fiscal loosening. By looking at the graph, you can see that periods of higher inflation have coincided with higher spending - but it’s unclear which has historically caused the other.


The results indicated that after a change to the level of tax, there was a minimal impact on the level of inflation: in fact, it was so minimal it wasn’t even statistically significant.


The graph below plots inflation both (modern CPI and the older RPI) against the level of the tax burden - which is the underlying data used by our model to estimate the impact of tax changes on inflation. You can see that when the tax burden goes down, inflation does not generally go up: it is very difficult to see any movement in the two price indexes sparked by bumps in the tax burden. As well as this, the most recent sustained period of significant tax cuts (in the 1980s under Thatcher and Lawson) had no visible impact on inflation. 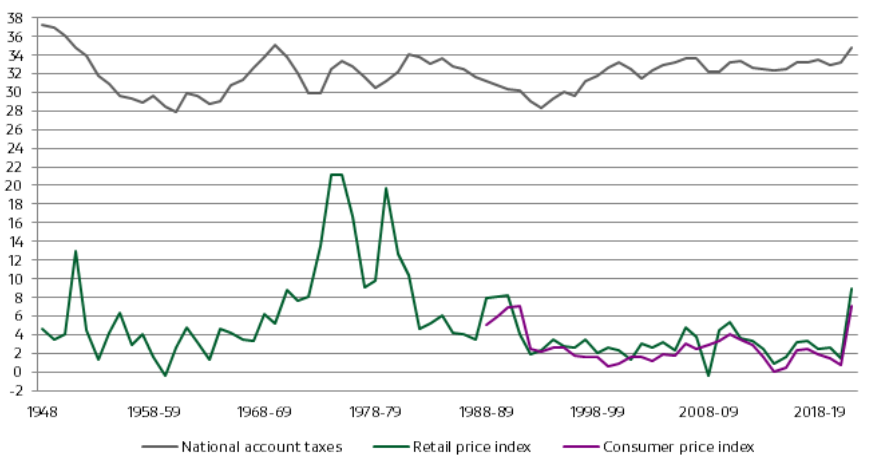 Now of course, inflation is a complex issue and consumer demand is only a part of it. To truly solve inflation, the underlying causes of it must be tackled. In this case, the underlying causes are largely a mixture of spiralling energy prices sparked by Putin’s war and supply chain issues as the global economy begins to get moving again after the pandemic. But this (admittedly limited) empirical data does suggest that claims that ‘tax cuts will drive an inflation spiral’ may be wide of the mark. This may well be why Liz Truss is sticking to her guns.


To say that we can’t cut taxes because we have to get a grip on inflation creates a false choice: we can choose to do both. As prominent economist Julian Jessop highlights, monetary policy (e.g. setting interest rates) has a far greater impact on inflation than fiscal policy (e.g. raising or lowering taxes). While cutting taxes may require a more aggressive raising of interest rates, plenty of economists - like Andrew Lilico - agree that this is no bad thing.


Inflation has also meant that the government is collecting more tax revenue, as more people are pushed over income tax thresholds and VAT receipts climb due to higher prices. In fact, at the end of July we pointed out that government revenues were £8 billion higher than the previous year. This only makes the case stronger to give taxpayers some of their cash back.


It’s no surprise that here at the TPA, we think taxes should be a lot lower than they are now - but the cost of living crisis has made it especially important for taxpayers to be able to hold onto more of their money. The pressure on the economy has also made it even more important to promote growth.  Almost everyone would agree that economic growth is the best antidote to a rising cost of living, both in the short term and the long term. It boosts disposable incomes and spending power while encouraging enterprise and investment. As we’ve been pointing out recently, a perfect tax to cut would be fuel duty - it would help to stimulate activity while also helping motorists to pay their astoundingly high fuel bills.


Inflation shouldn’t be an excuse to avoid cutting taxes! Historical data suggests politicians shouldn’t be scared of inflation when considering whether or not to help taxpayers by allowing them to keep more of their money. In fact, inflation and the cost of living crisis only make tax cuts all the more necessary.