According to a report by The New Culture Forum, more public installations and sculptures were opened in the 1990s and 2000s than in the entire preceding century. But the state cannot fairly decide which arts projects are worthy of funding, and which are not.

Philip Davies, the MP for Shipley, found out that the Arts Council was on track to spend £347 million on opera during the 2010–15 Parliament but only £1.8 million on brass bands. Other reports suggest that until recently, 50 percent of Arts Council funding was spent in London.

That gives the impression that arts funding is just as liable to be captured by more powerful vested interests as any other form of subsidy. Local and more niche art projects do not get the same support as something like opera, which could fund itself through private donations and ticket sales as it has done throughout its history. 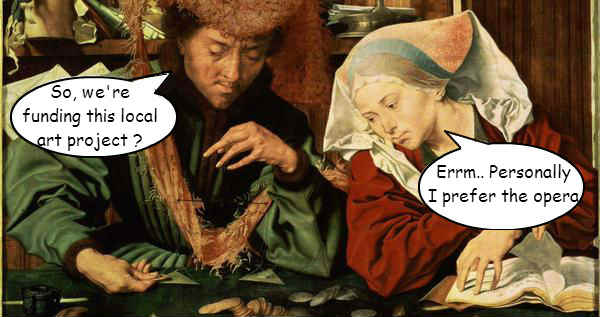 There is, of course, historical precedence for high quality arts being provided by the private sector and by people who pay for tickets. The Arts Council was established by Royal Charter in 1946: are we really to argue that a thriving and vibrant arts scene did not exist in the UK before this time?

Technology should play a major role in how artists seek to fund their activities. Crowd sourcing websites are increasingly used to obtain the cash to pursue an artistic project, and bureaucrats at quangos or in departments shouldn’t crowd out such innovations.

Some items of DCMS spending, such as free entry to museums, are arguably harder to justify scrapping. But quite often, many of the people visiting such venues would have done so anyway without subsidy. If museums or galleries want to encourage groups of schoolchildren to go for free, or extend opportunities for visitors who might not otherwise be able to go, then they should re-introduce charges and do that out of their budgets. We have estimated that £2.7 billion could be saved by abolishing the department while retaining an allocation of £30 million for heritage bodies.